Vaccinating Children during the Covid 19 Pandemic 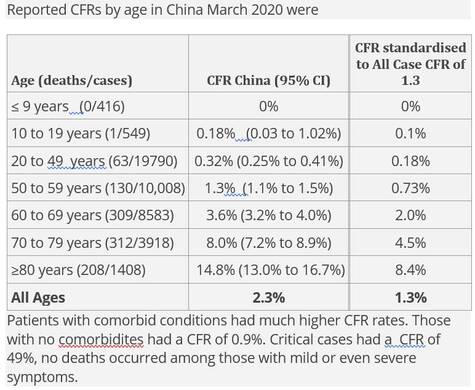 This article presents the opinion that the peak paediatric bodies, the health advisers and the government should:First, advocate that both Pfizer and Astrazenica vaccines are safe. That there is no practical risk difference between them. And that they are both very effective at preventing severe illness and death.
Second, advocate publicly that general practitioners may give whichever vaccine is available to children if requested. To further protect the doctor, she should document the discussion of benefit and risk and obtain a signed consent.
And third, that opening up should not occur until everyone who wanted to be vaccinated could have been vaccinated, including children, using available stock.

Pharma companies, their insurers, regulators and medical staff are appropriately cautious about approving new substances for use in children. Children need special care because decisions are made on their behalf. That is accepted. But that very fact disenfranchises them from many treatments. It is counter-intuitive that a perceived right actually abandons children to their illnesses.

Pharma often does not bother, or intend, to request approval for children. It is not worth their time and expense. And insurance is a problem because insurers, in their opinion, have had to face huge payouts that they feel were awarded by Santa Claus judges who saw difficult circumstances and felt that the insurers could afford to pay even though there was no negligence on pharma's part. But pharma and their insurers are not charities or funded social services. So they usually don't request, and the regulators don't approve, the therapy for minors.

At the same time senior or consultant doctors do treat children who they know would benefit from these un-approved therapies. So it is common (some say up to 40% of medications given to minors) for senior doctors to prescribe these therapies 'off label' (that is for a use not approved by the regulators) provided the doctor believes that the benefit of the treatment outweighs the risks and has documented a full disclosure in the medical notes and obtained a consent (all just to help protect the poor doctor). In these cases the doctor carries the full risk of being sued and facing the same judges and paying out more money than she could amass in a lifetime.

​ In Australia the regulator is the TGA, but ATAGI is the government's vaccine advisory group. In my opinion, despite AstraZenica vaccine being approved by the TGA for persons over 18 years old, ATAGI advised that it had a  higher risk than the other vaccine   for people aged under 60. It was not the preferred vaccine. It is difficult to follow the logic. The difference in risk between the two vaccines was minuscule and smaller than the risk we all take every day of our lives without thinking. And the risk of waiting for one brand rather than the other increased the risk at least a thousand fold.

Luckily the politicians seem to have been wiser than their health advisors. The Prime Minister first asked ATAGI to reconsider its advice and then he (the PM) advised Australians over 18 that they could receive AstraZenica vaccine from their own doctors (GPs) after signing a consent. But initially the government run vaccination hubs were hamstrung and could not give AstraZenica vaccine because it conflicted with ATAGI recommendations.

The Dohery Institute was commissioned to model and advise on the opening up (removing restrictions) of Australia with regard to vaccination levels. Apparently they suggested full opening up at 80% of the adult population two doses (fully) vaccinated. Again it is difficult to see the logic. Based on the R₀ of the Delta strain Covid19 and the infection-efficacy of the vaccines it appears that 91% of the whole population, including children and those who had already had Covid, would need to be vaccinated with Pfizer (practically impossible behaviorally), or over 100% (ie actually impossible) of the whole population vaccinated with AstraZenica, to prevent epidemic spread of Delta strain through the population. https://www.covid19ausblog.com/proportion-needed-to-vaccinate.html. And if Delta Covid is spreading through the population then there are morbidity and mortality risks for the unvaccinated - and this is the important bit - morbidity and mortality risks for the unvaccinated children.

It is unlikely pharma will seek approval for use of vaccines in children. The regulators are unable to approve the vaccines if pharma does not request approval. IMHO the vaccine advisors have not been of much use and their advice seems irrational. That leaves the politicians (I never dreamed I would ever say that) and the doctors.

It is already legal for parents to get a child vaccinated 'off label' from their doctor (documented full disclosure and signed consent) but parents need to be told about this avenue. It is up to the politicians to advice parents that that it is legal, and the government supports, children being vaccinated 'off label' with a vaccine, including AstraZenica, if their doctor believes the benefit exceeds the risk. https://www.nps.org.au/australian-prescriber/articles/off-label-prescribing  and  https://www.tga.gov.au/publication-issue/medicines-safety-update-volume-8-number-4-august-september-2017

Risks
So, what do the risks appear to be. Current data of child case fatality rates (CFR) is relatively difficult to obtain. But early studies in China and Spain have been reviewed. https://www.cebm.net/covid-19/global-covid-19-case-fatality-rates/

The effective case fatality rate (CFR) at the time the studies were done was 2.3%, but in the US as of August 2021 CFR appears to have fallen to 1.3%. In the column on the right the CFRs by age are adjusted downwards to reflect this 'all age' reduction in CFR over time (from 2.3 to 1.3).

The unvaccinated will all be infected with Covid19 eventually. It is just a matter of time.

This early data suggests a Case Fatality Rate (CFR) of 1000 deaths per million children aged 10 to 19.

Surprisingly, Australian data for children is far better, even with the delta strain.
​
The CFR for children aged 10-19 is reported to be as low as 186 per million.

​Data is given for ages down to ages 10-19, but can be extrapolated to younger age groups (because there appears to be a log relationship between CFR and Age; also demonstrated by Levine et al, December 2020).

Extrapolation of this data estimates that there would be about 250 deaths in unvaccinated children aged under 12 in Australia once restrictions are lifted. An unvaccinated individual will eventually be infected with Covid-19 (probably Delta) - it is only a matter of time.
​

Download File
Australian data updated on 13 September 2021 was used to extrapolate CFRs for children aged under 12 (<12s). The estimates are reduced by 0.013/0.04 because the current (NSW) wave has an all age CFR of 0.013 whereas the all age CFR of the Australian data was 0.04. A linear relationship between log10(CFR) and Mean Age was used because it produced lower CFR estimates.

The estimated current minimum CFR for <12s appears to be 45 deaths per million. Thus, in the worst case, 54 deaths in NSW and a further 103 deaths in the remainder of Australia may occur in the <12s if they remain unvaccinated during the 'opening up'. 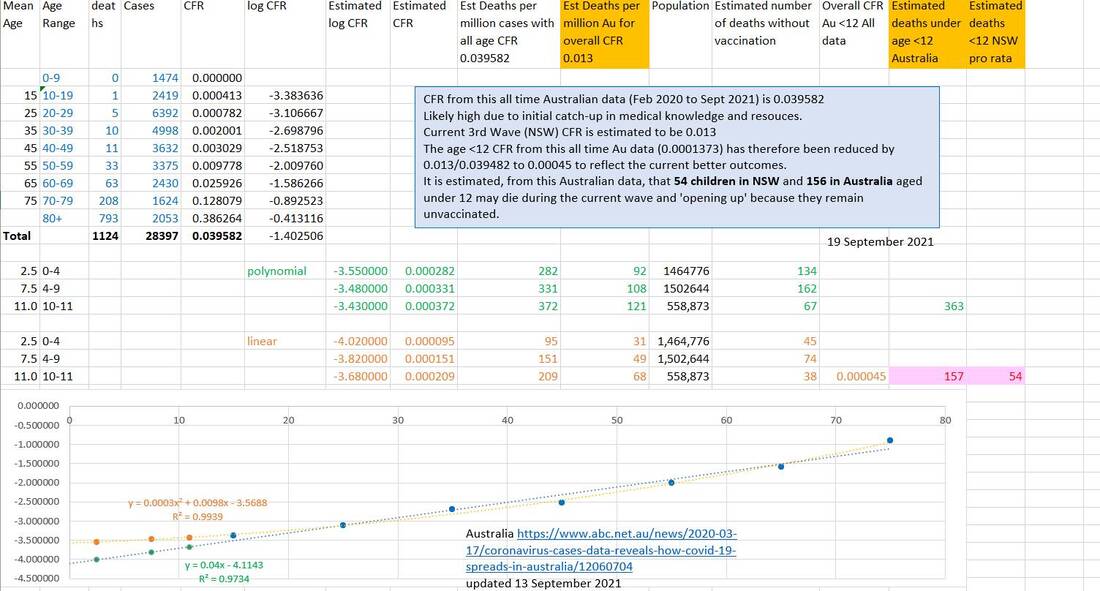 The current case fatality rates for Children under 12
The current case fatality rates (CFR) for children under age 12 is often contradictory. A discussion of the child CFR evidence has been moved here to shorten this article. Overall the CFR for under age 12 appears to be of the order of 45 or 50 per million infections. During 'opening up' the worst case would be that nearly every unvaccinated person will be infected sooner or later. Mathematically it is only a matter of time if viral presence persists. With Delta and AstraZenica vaccine the number needed to treat to produce 'herd immunity' is over 100% (ie impossible). With 57% Pfizer and 43% AZ the proportion needed to vaccinate is about 99.3% which is likely impossible to achieve for practical and behavioral reasons.

The best case would be that children under 12 would only be infected in the same ratio as the entire population. If Australia achieves 90% of whole population vaccinated, the cumulative cases is projected to be 275,000 out of a population of 25,800,000. If this ratio is applied to age <12 there would likely be a maximum of 2 deaths aged<12 in Australia (150*275K/25.8M).

It is difficult to predict what future policies will be in place, or whether opening Australia's borders will tend totwards the 'worst case'; a reasonable ratio would be the number of susceptible age <12 to the number of susceptible in the population (if 90% population and 33% age <12 vaccinated, 150*.
​Vaccine risk in comparison to other risks individuals take every day without thought
Australia had 1195 road deaths in 2019 (including infants) of which 159 were pedestrians. Which is a risk of 46 in a million a year, or 1.8 in a million of being killed by a car every 14 days of  life from birth till death. And the chance of being killed by a car as a pedestrian is 6 in a million in a year, which is only avoidable by never leaving home.

And the published risk for AstraZenica vaccine death is 0.5 in a million (call it 1 in a million for simplicity).

1 in a million (or less) of AstraZenica death, once in a lifetime risk including both doses.

If someone accepts the risk of car travel or bathing without much thought as a normal risk of living or 'safe' then, for them, vaccination is 'safe' and there is no risk difference between Pfizer and AstraZenica vaccines. They are both 'safe' within the meaning of 'safe' or 'acceptable' risk that they apply in their life. If they ski, SCUBA dive or parachute or anything similar, ever, the same logic applies.

​Decisions are not always rational, but they should be
It needs to be acknowledged that lack of foresight, bureaucracy, concrete thinking, irrationality, culture and blind obedience inhibits rational thought. And humans tend to grossly overestimate very low risks. And ethics and risk are no exception.

I remember a pharma company that wanted a whole study and piles of paperwork resubmitted to the ethics committee because they now intended to take 3 ml of blood from the children rather that 5 ml of blood. They argued that they had an ethical duty to provide 'full and transparent disclosure' and that meant amending and resubmitting all the study documents and consent forms to state what was 'actually' going to happen, and that was that 3 ml of blood were going to be taken.

The pharma company could not be convinced that if ethics had approved, and parents consented to, taking 5 ml, then only taking 3 ml was not an ethical (or any) problem. It can't be an ethical problem to take less blood than authorised for your study. It's a good thing. If everyone is happy about taking 5 ml, and if only 3 ml are taken where is the problem?

In Conclusion
The peak pediatric bodies, the health advisers and the government should:
First, advocate that both Pfizer and Astrazenica vaccines are safe. That there is no practical risk difference between them. That they are both very effective at preventing severe illness and death.
Second advocate publicly that general practitioners should give whichever vaccine is available, to children if requested by parents, off label. To further protect the doctor, she should document the discussion of benefit and risk and obtain a signed consent.
Third, that opening up should not occur until everyone, including children, who wanted to be vaccinated could have been vaccinated using available stock.

Not professional advice. Get independent advice.

Link HERE to a website that publishes views of paediatricians that appear rational and ethical. Their first Principle is 'that reasonable steps to protect people and reduce risk should not await scientific certainty'. I would usually wait for as close to certainty as is reasonable, but I believe it is rational to vaccinate all small children, whose parents wish, on current evidence while in an epidemic where the government is 'opening up' while small children are unvaccinated against a potentially fatal disease.