Effective R amongst the Still Susceptible (eRs) versus eR

​This article argues that the effective R amongst the still susceptible (eRs) is a better and more intuitive and useful measure of the effective reproduction number of an infection than the default effective R (variously eR, Re, effR) commonly used. Cases numbers and their relationship to eRs and eR for US and Australia are used.
eRs is more intuitive because it describes how the infectious agent is interacting with those in the population who are actually susceptible to the infection. The non-susceptible are irrelevant (agnostic) to the infection and not excluding them dilutes the utility of eR. eRs shows when the infection is epidemic amongst the susceptible individuals in a population even when eR is, apparently reassuringly, below 1. Thus eR may be misleading to health advisors, politicians and the public.

If the number vaccinated with  1st only and 2nd dose are v1 and v2 and the vaccine has an efficacy of e1 and e2 respectively and if the efficacy of prior infection for the current strain at preventing a further infection is f then the non susceptible individuals number = e1v1 + e2v2 + f * cumulative infections to date. If the population is P and the cumulative total cases is T then:

1. The effectiveness of restrictions, known as NPIs, can be assessed from eRs, and
2. It allows an intuitive understanding of what is driving or retarding the new infection numbers.

The drivers of the infection and the restrictions are acting on the susceptible only. The non-susceptible are agnostic; they are not driven or restricted and produce no new infections and do not play a part in infection spread. The default effective R (eR) on the other hand does not even take population into account, and to the extent that some type of population is implied it lumps susceptible and non susceptible individuals together.  By comparing the definitions of eRs with eR it can be seen that eR implies that (P / (P - e1v1 - e2v2 - fT)) = 1, and thus that e1v1 + e2v2 + fT = 0 and thus that every individual is presumed permanently susceptible. Or, in other words, eR does not take into account the changing susceptibility of the population.
The effectiveness of restrictions, or of NPIs, can be calculated from eRs.

where eRs is constrained to the range 0 to R₀. The constraint is necessary because published case data does fluctuate markedly probably because it is batched during collection and compiling and thus contains false high frequency signals. When new strains appear the R₀ can be adjusted according to the proportions of the strains and their individual values of R₀. EOR is in the range of 0 to 1 (or 0% to 100% effective at inhibiting viral replication).

It is difficult to determine what any change in EOR means. It may relate to the introduction of a restriction or improved compliance with restrictions or the slow onset of the effect of restrictions as high infectors (like truck drivers, large households) become non-infectious and the virus struggles to replicate in low infectors (like single dwellers or non party goers). It may be possible to map certain values of EOR to particular interventions.
eR as a measure of  the drivers of an infection
The difference between eR and eRs can be seen in the current wave of Covid-19 in the US in the chart below. The eR has remained at around 1 for nearly all of the epidemic. One hypothesis would be that health advisors, politicians and the public use eR in part to determine their behaviour, increasing restrictions and vaccination rates when case numbers increase. Especially if a wave is occurring. And relaxing them when case numbers decrease. A useful property of eR is that an eR of 1 is the threshold above which case numbers increase, or below which case numbers decrease. But it may be that keeping eR just below 1 is a false goal; it may encourage restrictions to be eased which in turn delays the further reduction in case numbers. eR may also give a false signal when it deceases as vaccination is rolled out. If vaccination increases then a stable eR near 1 hides the fact that stable case numbers while the number of susceptible individuals is shrinking means that the infection spread amongst the susceptible is increasing. A rising eRs would show that increase in transmission.

In the chart eRs diverges from eR once vaccination is introduced (the proportion fully vaccinated is shown as a dashed purple line with values 0 to 1 on the right axis). eRs and eR are almost identical early in the epidemic when the entire population is susceptible. During the first wave shown, it can be hypothesized that several attempts to bring case numbers down were defeated when case numbers started to come down encouraging the premature and excessive easing of restrictions. The same mechanism can be hypothesized towards the end of the wave resulting in a mini peak (late march to mid April 2021). The eR of about 1 hid the fact that the R amongst the susceptible (eRs) was increasing from 1.2 to 1.6 because the vaccine roll-out was decreasing the proportion of the population that was susceptible. Similar case numbers coming from a smaller pool of susceptible indicates increasing spread. The eRs was already 1.6 (epidemic) when the Delta strain appeared. 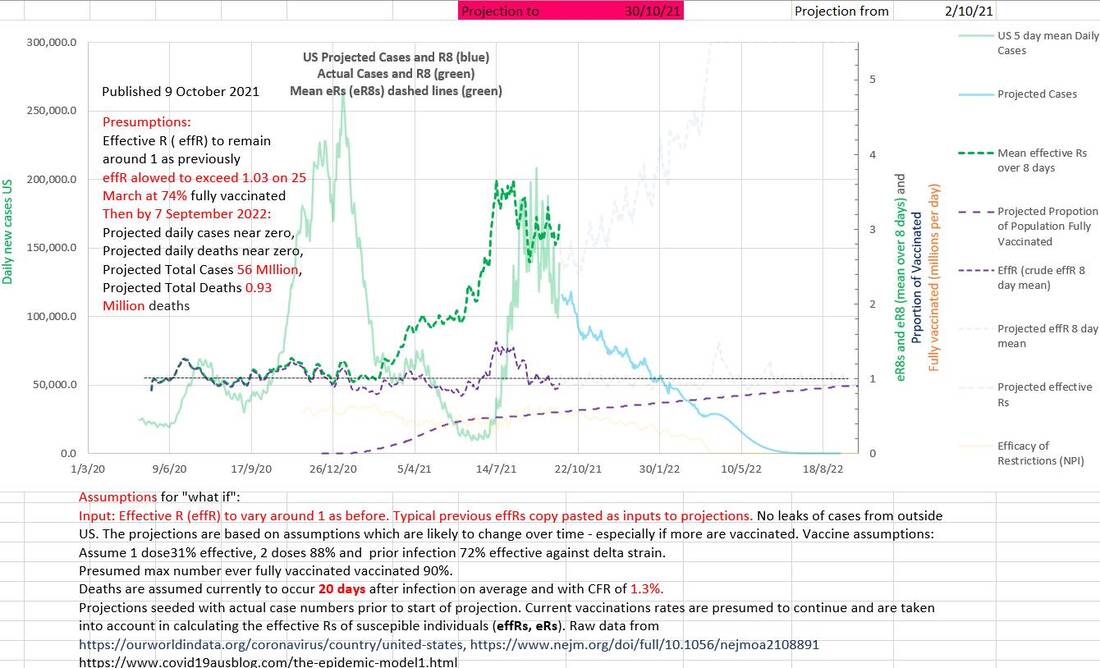 In the chart above, the eR less than 1 at 2nd October 2021 may  suggest that the wave is 'under control' and case numbers would continue to fall. But there are two potential flaws in that belief. The first is that the effective R amongst the susceptible portion of the population (eRs) is over 3 and certainly 'epidemic' amongst them, and secondly the apparent natural inclination would be to ease up on restrictions which may precipitate another increase in case numbers.

In the chart of the same data below, the effectiveness of the restrictions or NPIs (in orange) has been calculated from the eRs and is 1 - eRs/R₀ where eRs is constrained to the range of 0 to R₀, (and R₀ increased appropriately from 2.5 to 5.5 as the Delta strain became predominant). The maximum effectiveness of the restrictions was 67% in September 2020 and had already fallen to 40% efficacy in April 2021 (probably due to falling case numbers, low eR and the success of the vaccination program) before the Delta strain entered the US after perhaps late April. If eR continues to be kept at about 1 from 2 October onwards (as before) cases would continue to fall, the eRs would climb to R₀ (5.5) and the restrictions (or NPI) must have fallen appropriately slowly to zero (otherwise the eR would have dropped well below 1). 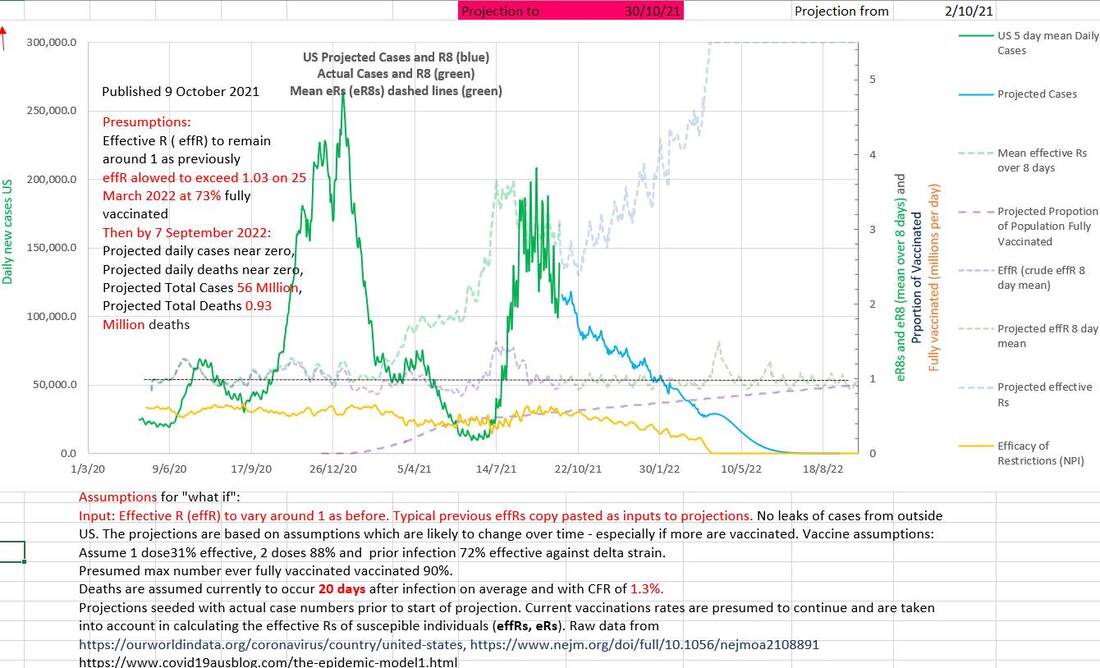 If the same two spikes in eR that occurred from November 2020 to mid January 2021 were allowed to occur again in December 2021, a spike in eRs and in case number would occur. The efficacy of restrictions shown (in orange) would be shown to decrease. It would result in an extra 5 million cases and an extra 70,000 deaths. 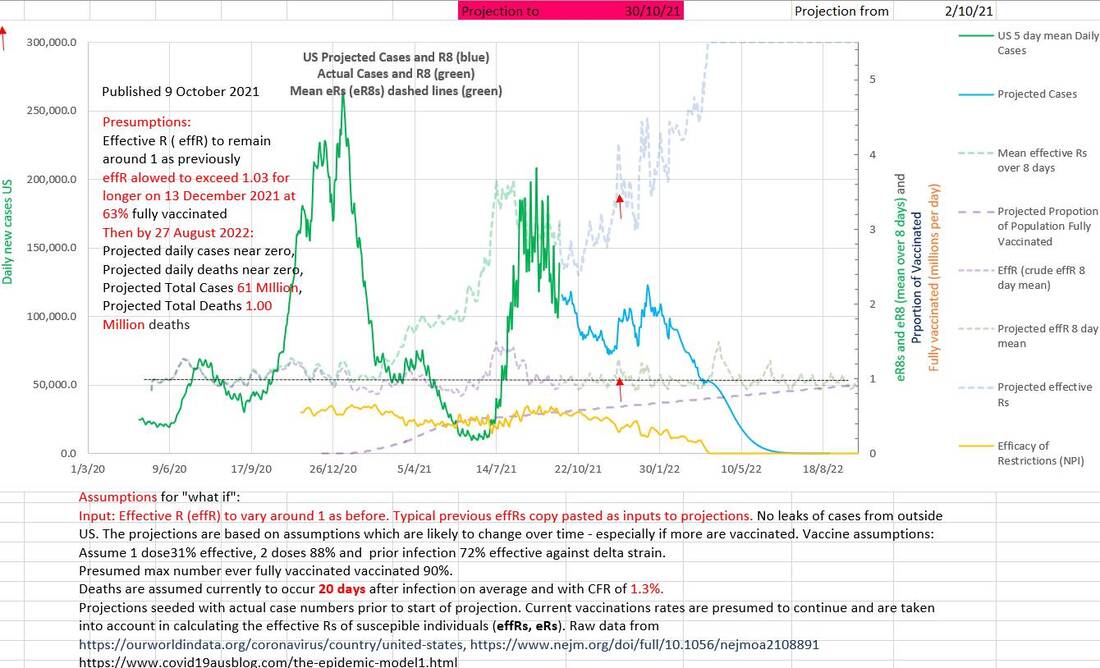 The earlier that an injudicious decrease in effectiveness of restrictions occurs, the greater is the effect on case numbers and deaths. In the charts below the same un-remedied spike in eR in December 2021 produces worse effects on cases and deaths than it does in February 2022.
In Australia the policy until recently has been to to keep viral spread in the community to zero using isolation and other non pharmaceutical interventions (NPI) and to quarantine new arrivals from overseas. Various States closed borders to other States. Currently vaccination is underway and NSW has started 'opening up' by reducing NPIs once 80% of over age 16 (>16) in NSW had been vaccinated (64% of the population of NSW). 57% of vaccinations in Australia have been with Pfizer, the remainder with AstaZenica. The combined efficacy was taken to be 31% first dose and 82% second dose for the mix. And the efficacy of past infection to prevent a further infection was 72%. NEJM article here.

In theory it should not be possible to prevent a new wave of infection in Australia by vaccination.

​The proportion needed to vaccinate without restrictions, PNV, is      (1 - 1/R₀ - (FT)/P)/E
where R₀ is the reproduction number of Delta strain, F if the efficacy of past infection to prevent infection, T is the cumulative number of past cases, P is the total population and E is the efficacy of the mix of vaccines used. 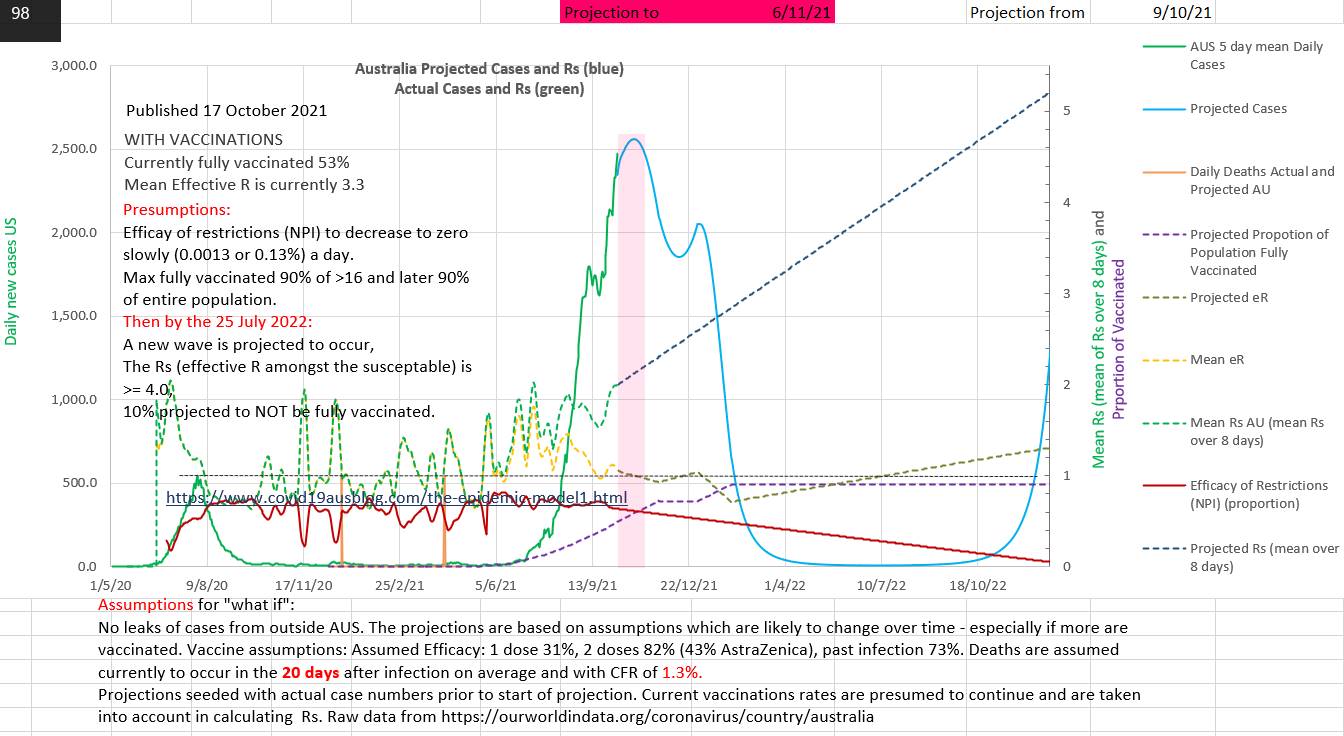 It can be noted in the chart above that the effective R amongst the susceptible (Rs) moves away from the effective R (eR) once vaccination starts. It moves away as cumulative cases increase, but the difference is small and only easily seen in the peaks of Rs. Rs can also be seen to be inversely proportional to the efficacy of restrictions (EOR) and to be insensitive to vaccination. That accords with the fact that Rs measures the R amongst the susceptible (not the vaccinated) and that the restrictions (NPI) act against the susceptible, restrictions having no effect on the non-susceptible. So Rs reaches R₀ when EOR reaches zero. eR reduces with vaccination and increases with a reduction in EOR. eR can be misleading because it is the nearly the same as Rs in the early epidemic stage, but once vaccination begins eR hides the fact that the reproduction number amongst the susceptible (Rs) is rising even though cases may be declining quickly and encouragingly. The minimum number of cases prior to the next wave projected in July 2022 was 6 new cases a day.

Surprisingly Rs (the effective R amongst the susceptible - the only group in which restrictions are effective) dropped sharply in the last week in Australia (the chart below). This may have represented new restrictions put in place and/or better compliance with restrictions. Probably in Victoria because eR, Rs and efficacy of restrictions are measures which only apply where the virus is replicating. They don't have meaning where there is no viral replication, though a possible or potential value may be inferred to a limited extent. 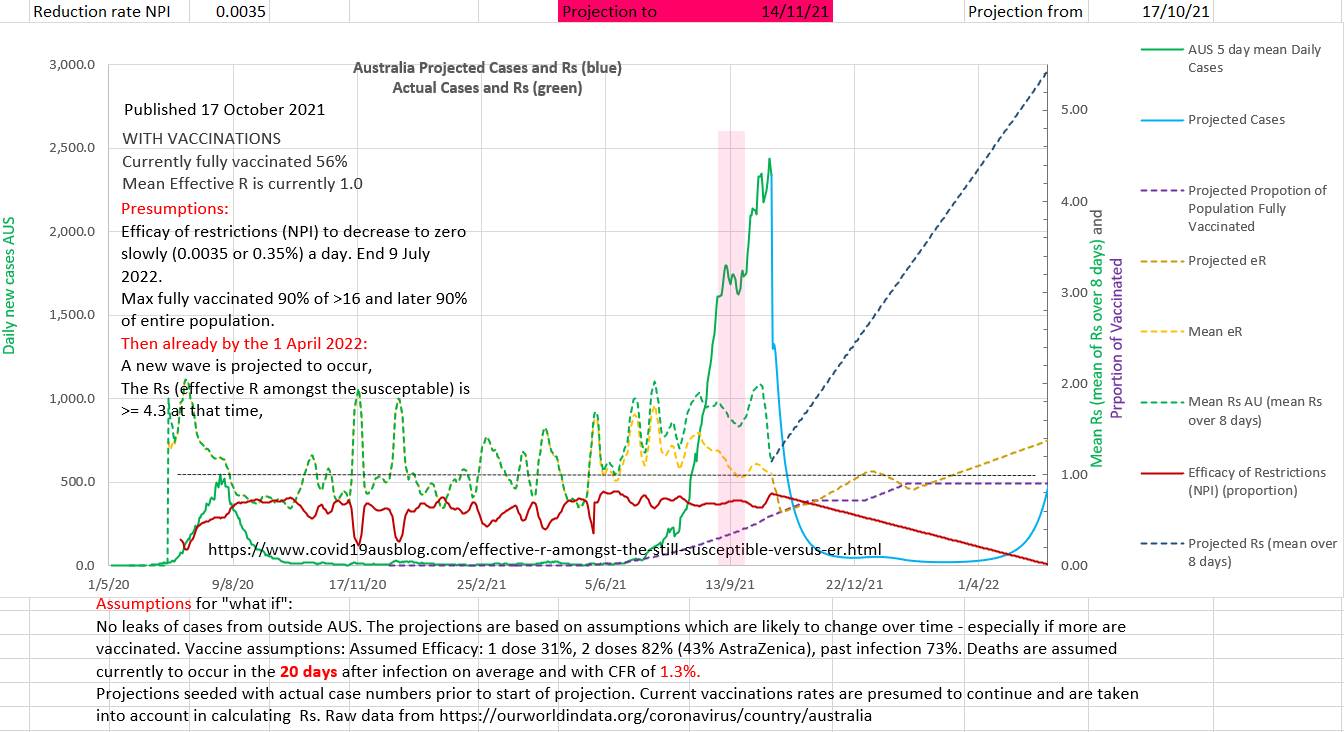 ​The chart above suggests that cases declined sharply because restrictions became effective or more effective recently. So, the slow 'opening up' from these restrictions starts at a higher EOR. Predicting how fast restrictions will be eased is impossible, but various rates can be compared with each other. All rates should ultimately fail because the proportion needed to vaccinate (PNV), calculated above, suggests that even 100% vaccinated will not be effective with 43% AZ in the mix and no restrictions. In the above chart restriction are input as reducing by 0.0035. New cases daily decrease as children over 5 are vaccinated, but produce a new wave starting about 1 April 2022.
In Summary

The effective R operating on the still susceptible, eRs or Rs, has a number of advantages over the default effective R, eR.